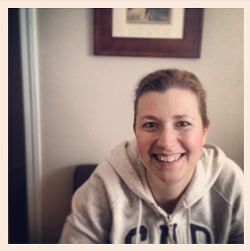 Angela Hutchison began singing with her family when she could stand on a chair and carry a tune into a microphone. From as far back as she can remember, music was a signifcant part of the everyday - it was the soundtrack for life. Her mother imparted the love of music by example, and by letting Angela's little fnger follow along the notes of a hymnbook as she sang them to her one by one.

She contributed her vocals to her family's frst album way back in 1991 as a freshman in high school, but it wasn't until college that Angela began to take songwriting seriously. After a year studying studio recording, Angela completed her frst solo demo in 1998, and she and her family plunged into recording a family album as well.

Since that frst demo she has recorded 6 albums: Hutchison family collectives "Hymns," "Christmas," & "Songs," and solo albums "Grace Child," "Hope For Sure," & "Unconquered," with "Held" being 7th in the lineup.

Angela's music has always been a developing blend of modern acoustic worship and singable cofee-house folk, infuenced by some of her favorite songwriters, like Rich Mullins, Mark Heard, and Andrew Peterson. Several years back, one reviewer described her music this way: "Haunting, hopeful, never hurried...steady like a morning mist...It shouldn't be wrapped in cellophane, it should come packaged in a cofee-stained napkin." In whatever form it came, the music's message was unbroken. It was Angela and her family's greatest desire that their music would paint a picture of the hope they had found in Jesus.

A lot of living has happened between the now and then. Music has been less a career, and more of a steady, constant refrain. Life took an unexpected turn in 2003 when Angela's mom was diagnosed with terminal cancer. For the next 6 years, music became a way of expressing God's faithfulness in a world that is temporary and painful. Adriana Hutchison passed away in 2009.

With lyrics for another album already years in the making, Angela continued to revisit journal entries, hone old songs, and pen new ones in earnest during the year following her mother's death. The result was the 2010 release "Unconquered," inspired by the truth found in the pages of the Bible: "So we do not lose heart... For this light momentary afiction is preparing for us an eternal weight of glory beyond all comparison" (2 Corinthians 4:16-17, ESV).

Since that time Angela has continued to live, work, write, and invest in her home church. As always, music is simply woven into the fabric of daily life, with each new song a fresh refection on the hope, truth and security she has found in Jesus Christ.

There is a part in C.S. Lewis' Prince Caspian in which Lucy meets Aslan:

"Aslan," said Lucy, "you're bigger."
"That is because you are older, little one," answered he.
"Not because you are?"
"I am not. But every year you grow, you will find me bigger."1

And so Angela Hutchison has found it to be. Her new 5-song EP "Held" is a joyful expression of this truth.